SURSTRÖMMING IN THE NEWS

Everyone who has difficulty with the smell of fermented herring should thank their lucky star for not visiting the harbor in Örnsköldsvik during that day.

The bread was baked during the Friday and then rolled out on tables on Saturday. The flat bread was prepared with fermented herring and accessories such as onions and potatoes.

- It has gone very well, you were a little worried that the bread would fall appart, but it held together, said the bakery's Torbjörn Ullsten, CEO of Mjälloms Tunnbröd bakery, which one of the persons behind the record attempt. He estimates the baking time at 2.5 hours. We got the idea a few years ago to bake the world's largest flatbread. Guinness World Records was contacted, and the bakery decided to take on the record attempt in connection with sailing competitions in the port.

​​25 kilos of surströmming, 100 kilos of potatoes, and eight kilos of butter was needed to fill the bread. The world record inspector Eero Niemi had to use a number of measuring points to determine the area, but in the end he got a result: 30.57 square meters. A doubling of the old Guinness record for the "flatbread" category in which they competed. Torbjörn Ullsten then cut the sour herring sandwich into smaller pieces that hungry strollers could taste, and the queue was quite long. 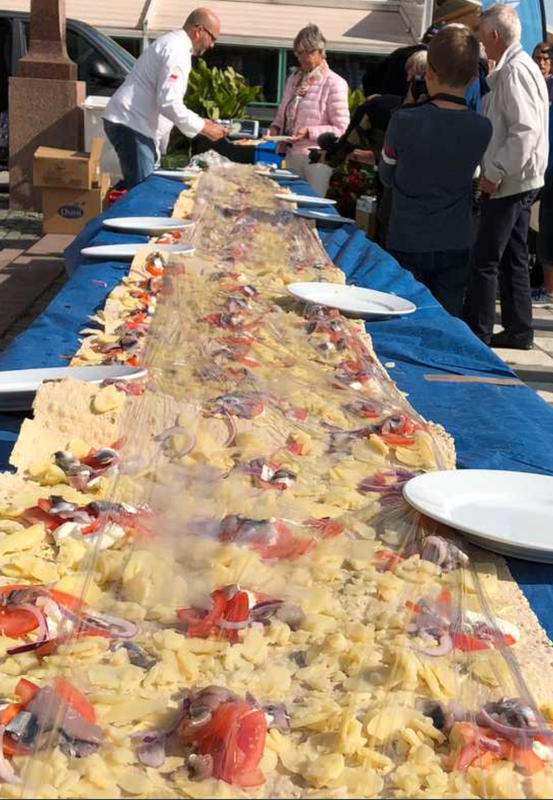 60-meter-long flatbread with a total area of ​​30 square meters. Photo: Mjälloms Tunnbröd/TT
THE ROTTEN ELECTION SYSTEM - 2018
During the by-elections in March 2018 in Hong Kong​, Chan Yuen-Man, the returning Army officer, disqualified two local candidates, James Chan Kwok-Keung and Ventus Lau. Lau had visited the Home Affairs Department of Sha Tin District Office to carry a can of surströmming. His act of opening the can in public was considered highly offensive. Lau later revealed that he wanted Chan to feel that the Hong Kong people were experiencing an entirely rotten election system. Lau had also launched an appeal to the court, but the court concluded that the decisions of Chans were not vindicated.
​​SWEDEN FIRE TURN CANS OF ROTTEN FISH INTO EXPLOSING MISSILES - 2014
In may, 2014 BBC published the article with the same title claiming that old cans could turn into exploding missiles. That headline was an inspiration for our Facebook cover picture.

The story was about a warehouse with 1,000 cans of surströmming in the east of Sweden that caught fire. The heat from the fire heated the cans until they exploded. The owner told the newspaper that it smelled like fried fermented herring. The firefighters initially thought that the sound they heard was from exploding propane bottles.

The warehouse owner, Hans-Erik Englund, witnessed one can fly over an outhouse roof while another shot over the bay to a neighbour's house. The explosions continued for six hours.

BANNED BY AIRLINES - 2006
Many other major airlines in 2006, including British Airways, Air France, KLM, and Finnair, had proscribed the fish. The airlines claimed that the pressurized tins were quite explosive. Also, the sale of surströmming was later withdrawn by Stockholm's international airport.
​
This act was later followed by feelings of disappointment among the producers who believed that airlines' decision was "culturally illiterate." The producers further claimed that the explosion of the tins was just a myth.
​GERMAN LANDLORD OPENS CAN IN COURT - 1981
An interesting story dates back to 1981 when a landlord evicted a tenant in Germany without legal notice. This happened when the tenant was caught spreading surströmming brine in the stairwell of the building.