​The basics
Surströmming, also known as fermented herring, is a traditional Swedish delicacy that has been enjoyed for centuries. The dish is made by fermenting Baltic Sea herring in a mixture of salt, water, and sometimes other ingredients such as sugar and dill. The fermentation process gives the herring a distinct, spicy aroma and a tangy, savory flavor unique to surströmming.

Exotic food for non-Swedes
While surströmming may not be well-known outside of Sweden, it is a beloved and deeply ingrained part of the country's food culture. In the summer months, many Swedes enjoy surströmming as a traditional part of their midsummer celebrations. The dish is typically served with thin, crispy flatbread, potatoes, and other accompaniments such as sour cream, chives, and dill.
​
Use it as an ingredient in dishes
One of the most exciting facts about surströmming is that it is incredibly versatile. While it is often enjoyed simply with bread and butter, it can also be used in various recipes. For example, it can be used as a topping for pizza, a filling for sandwiches, or even as an ingredient in a traditional Swedish pancake dish known as "pannkakor."

You can even make something called, Mannerström's fermented herring box.
Leif Mannerström from Gothenburg, is a star chef and the nestor of Swedish cuisine.

Set the oven to 200 degrees. Rinse the herring in cold water. Clean the herring and remove the bones and any skin. Peel and thinly slice the onion. Fry in butter in a frying pan until golden brown. Drain and save the juice from the anchovies. Peel the potatoes and cut them into thin strips. Place the potatoes, onions, herring, anchovies and dill in a greased baking dish measuring about 18x25 centimeters. Finish with the potatoes. Whisk together the cream, anchovy paste and tomato paste. Pour the mixture over the potatoes. Bake in the lower part of the oven for 45-50 minutes.

Below you can see the the result after around 45 minutes in the oven. Would you like to have a taste? 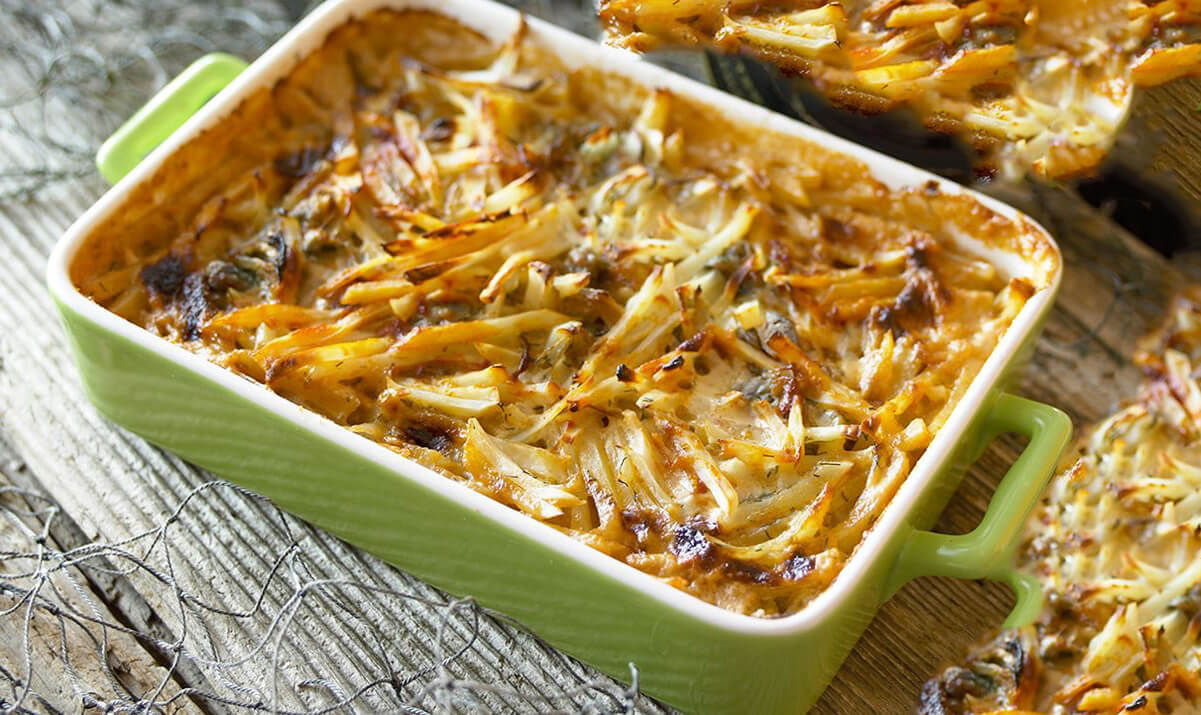 ​Fermenting is an ancient method to conserve food
Another interesting fact about surströmming is that it is one of the oldest forms of food preservation known to man. Fermenting food was a way for our ancestors to extend the shelf life of perishable goods before the invention of refrigeration. Similarly, surströmming has been enjoyed in Sweden for centuries due to the abundance of herring in the Baltic sea and the long shelf life of the fermented fish.
Surströmming also has a bit of a reputation for its pungent aroma. Due to the fermentation process, surströmming releases gases that can cause the can to bulge and expand. Many people find the smell of surströmming to be overwhelming and even offensive

6 additional facts about surströmming
Surströmming is a traditional Swedish delicacy that has been enjoyed for centuries. It is a fermented herring known for its strong, pungent smell and unique flavor. While it is a beloved food in Sweden, it is not as well-known in other parts of the world. Here are a few unknown facts about surströmming that may surprise you.Strong taste and potent smell
Surströmming has a strong taste, not everyone likes it, but for those who do, it can be a delicacy. Some people love it, others can't stand it. The smell is quite potent and has been described as a mix between rotting fish and old socks. It's not for the faint of heart. Surströmming is not just a delicacy, it is also a cultural tradition that is steeped in history. It is a beloved part of Swedish cuisine and a symbol of the country's heritage. The process of fermenting fish may be old, but surströmming continues to be enjoyed by many today.

Banned
The smell of surströmming is so strong that it is banned from being opened indoors in some apartment buildings in Sweden? This is because the smell can linger for days and even permeate through walls.