THE TRADITION OF SURSTRÖMMING

Unlike many festive dishes, surströmming originated as cheap everyday food in farming society. The fermentation of fish was, in fact, a method of preserving fish. Surströmming is known in Sweden from at least the 16th century when people traded in surströmming. Sales gradually increased in the south, thanks partly to improved packaging (wooden kegs, jugs, and later tins).

In the 19th century, the tradition of eating surströmming also began to move through society's social strata, and the former poor man's food became festive food. Since 1940, the annual opening of the Surströmmingsfest has been set for the third Thursday in August. Increased demand and competition led to the sale of unfinished (unfermented) herring. The spawning herring is fished in the spring. After gutting, it is left to soak in heavily salted water (brine) for about two days or until all the blood has been drained. It is then placed in barrels with a weaker brine for fermentation for six to eight weeks. By early July it is usually ready to be packaged in tin cans.

Surströmming is a dish that many people are ambivalent about. Some praise it, and others find it disgusting. Charles Emil Hagdahl, the most famous Swedish cookbook author of the 19th century, wrote the following pithy words in his cookbook in 1891:

"Surströmming is an ancient dish, the preparation of which nature herself has always provided from the creation of the world. Our first parents used it even outside the gates of paradise, and it was always known, as well at all kitchen feasts and papal dinners, as by the Greeks and Romans, for everyone knew what rotten fish meant, but the taste for it was not yet as developed as now - no haut gout was then known ...

Sour herring is eaten only by the initiated - su naturelle, with no other sauce that makes the mouth water. It is considered a delicacy of the most delicious kind, but it never becomes a meal unless the host prefers to eat alone or perhaps chooses guests who are without a nose." From the book, The Art of Cookery as Science and Art by Ch. Em. Hagdahl 1891.

​The sour herring premiere takes place at the 3rd Thursday in August. True enthusiasts, however, eat the previous year’s vintage. By that time, the herring is fully matured and tender.​

The Surströmming premiere is the start of consumption of a dish that many people are ambivalent about. Surströmming means that the herring is fermented (yeasted) and therefore acquires the special aroma that many people shy away from. Surströmming is usually associated with the northern part of Sweden, but it is eaten with thin bread, onions, and perhaps schnapps in many places.

Like the crayfish, the surströmming is often linked to the idea of Swedishness and regional identity. We associate surströmming with northern Sweden, where many say they know how to eat the dish properly. Claims to such expertise are quite typical of traditions associated with certain regions and places. In recent years, surströmming has been tested by international chefs who, giggling at the smell, nevertheless say they appreciate this delicacy. 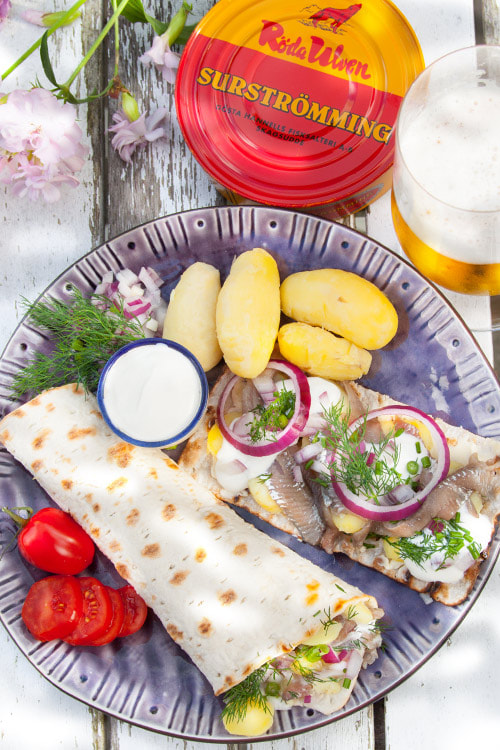 Opening a can of surstromming at the premiere.